James Gurney is best known as the creator of Dinotopia, but is also a prolific plein air sketcher and online art teacher. I can't love him enough.

Check out his free tutorials on Youtube and reasonably priced longer videos on his online shops. I have learnt many good tips from his tutorials and I've been inspired to paint from live like him despite the not very pleasant UK weather. He makes it look so fun and easy in the videos. Though he does often spend 3-4hrs on a painting. This I find is also the amount of time I take to do a sketch that I am happy with.

He doesn't call himself an urban sketcher, and doesn't involve so much in the Urban Sketching groups. He seems to prefer the term 'plein air'. He's probably been doing this before the term urban sketching was coined! I associate urban sketching with a speedier, simpler sketching. Most meet ups last only up to an hour or so of sketching. Though on the Kick In The Creatives podcast, super Urban Sketcher, Ian Fennelly said in the interview that he normally takes around 4hrs to do a sketch.

I like that he often chooses the mundane scenes to paint, such as, shop signage, streets, pile of snow in a car park, and yet make them remarkable. Though, like the urban sketchers, his subjects are usually urban scenes, sketched on location from live, it does feel more like good old fashioned plein air than urban sketching. I guess because his works do look more like 'finished' paintings rather than rough sketches and there's something old fashioned and idyllic about his paintings, even when he is just painting a pile of snow in the carpark. You don't need to have a beautiful subject to create a beautiful painting. 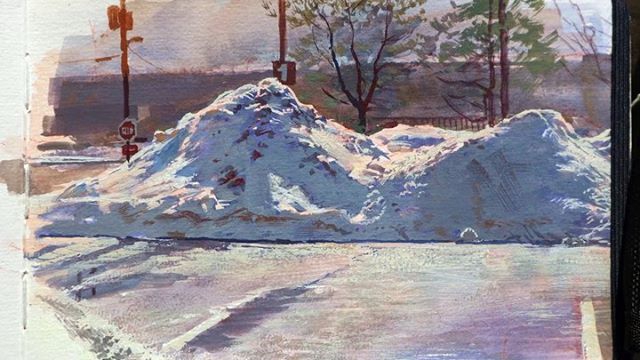 Like with Lena Rivo and many of the artists I admire, he is a master in capturing light. Many of his paintings feature transitional lighting such as sunset. It has always been a dream of mine to capture the twilight and night scenes as they don't get captured accurately by camera. I still haven't figured out how. Perhaps I'll find out from him.

Unlike most other artists, he doesn't stick to just one particular medium or style, but rather, dabbled in various different areas of art. I love his DIY easel tutorials, and can't wait to make one myself. Check out the Sketch Easel Builders facebook group that he started.

Unsurprisingly he is a great concept artist as well, particularly in his drawings of dinosaurs. And he's good with portraits too, and animals.

He's an avid blogger, and his blog is one of the few that I pored over regularly (I'm not usually big on blogs these days). He has thousands of blog posts! It is unlikely I can ever finish reading them. Something to look forward to.