During this lockdown period, some art supplies have inevitably gone out of stock. It seems appropriate at this time to try out drypoint etching on various materials commonly found in household waste. I have tried etching on tetrapak, and now my latest experiment is on plastic sheet cut out from ham packaging.

First, you will need to remove the big label from the packaging. I remove it by tearing off the label, and then use the almighty Zest-it to remove the sticky residue. 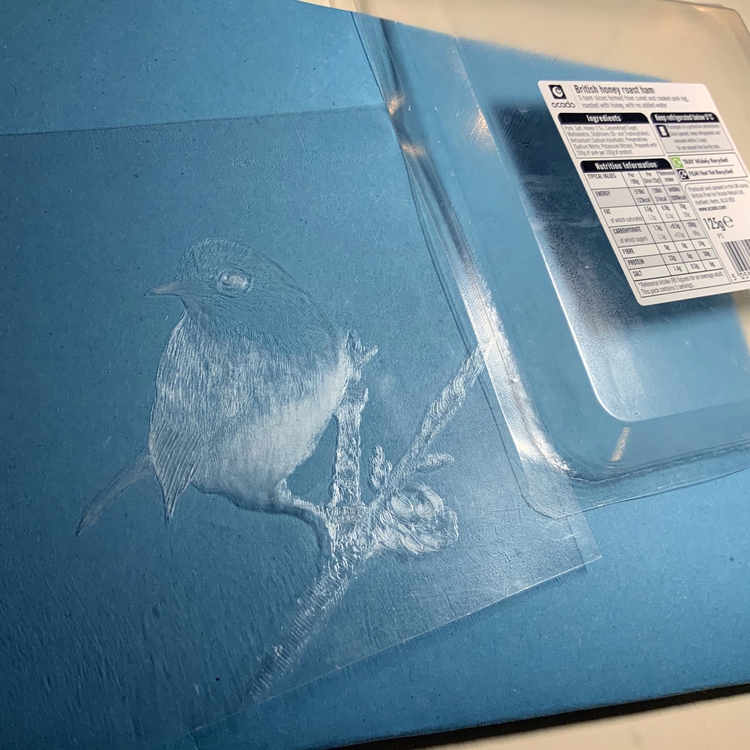 Unlike Tetrapak, where you could peel off selected areas to reveal the cardboard underlayer for flat black zones, with plastic you only have lines or grays. To get the beak really dark, I found I had to do a very dense hatching with the etching needle to achieve a satisfactory black. This may not work so well is the black area were larger.

I found you could achieve various shades of gray by roughening up the plastic with sandpaper or wire brush. I haven't tried this with Tetrapak, but I suspect it won't work so well on Tetrapak as the paper will probably get too mangled by this. I needed to constrain the gray to the bird's breast, so I used a frisket film to mask the areas which should not have the gray. This seems to work rather well. And then on top of this gray background, I can add more lines to build the design.

Mistakes can be 'erased' with a burnisher to a certain extent. The mark won't be gone completely but it could be lighten. Though too much burnishing could result in a gray patch. [Edited:] I can't vouch for this as I have only 'erased' a small mistake. I wouldn't count on this as an erasing tool for plastic. Though if you are desperate to remove an accidental mark (like I was), it is an option.

Unlike Tetrapak, where you could peel off selected areas to reveal the cardboard underlayer for flat black zones, with plastic you only have lines or grays. 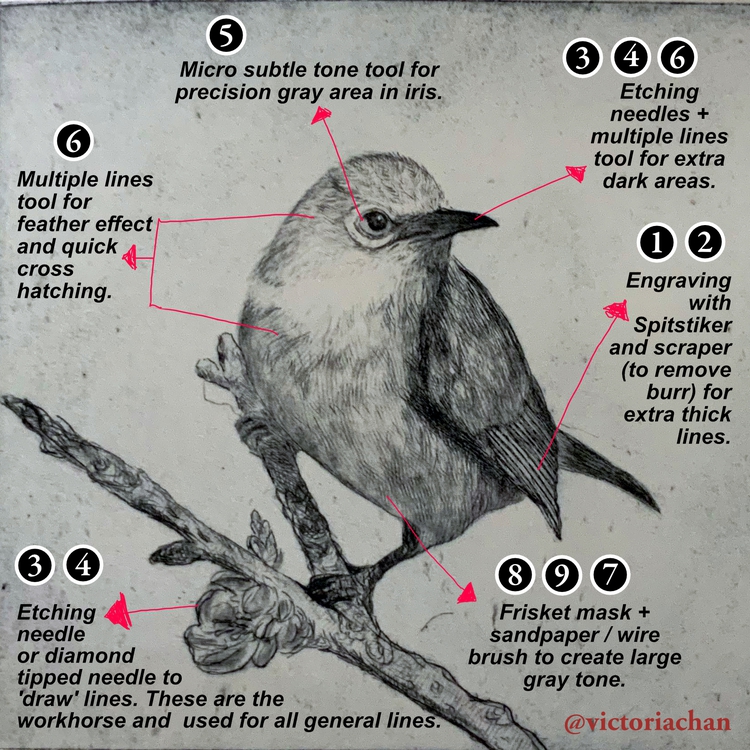 This is used to remove excessive burrs created when using engraving tools (such as the spitstiker) to etch a line on the plastic plate.

Wood engraving tools such as Spitstiker and gravers are sometimes used for Intaglio printing, especially on copper plates. I didn't have a graver, so I used my Spitstiker instead. The first thing I noticed was how much burr (i.e. scrapes) are created when etching with this. I used a scraper to remove these. The line was rather hard to control, so the tool won't be good for precision areas. It is good for making extra large lines though, much deeper and wider than you can get with an etching needle. I probably won't be using it very much. Also you'll need to be careful not to accidentally cut through the plastic.

This was my only tool for awhile. If you are getting just one tool for drypoint, this would be the one. It is the main tool used for lines and hatching and stippling. You can get etching needles from various manufacturers. You also don't need a double ended one. The EC Lyons needle that I have is made of high carbon tool steel and is designed to be sharpened. I use a 4000 grit Japanese whetstone to sharpen it. I found it rather awkward to sharpen though as the point is round, so I needed to constantly turn it as I sharpen. In the end after my sharpening it wasn't quite so round anymore, though it didn't affect its function. Not sure if there is an easier way to sharpen it. Also the tool is quite heavy and doesn't hold well when drawing. So perhaps should not have gotten a double ended one.

This serves pretty much the same purpose as the double ended etching needle. The exception is that the diamond tip cuts beautifully, which is great for precision, and you don't have to sharpen it. However because of the way the diamond is set on the tip, you have to hold the tool rather upright when etching to avoid displacing the diamond. You can also get diamond tipped needles from various manufacturers. The one I have is beautifully crafted by Matthieu Coulanges. Diamond tipped needles are rather pricey and not necessary, but what a luxury to pamper one with.

This is a clever invention by Matthieu Coulanges. It comes as an optional compatible tip to the micro etching tool. The micro etching tool comes with several interchangeable needles. The subtle tone tip looks like a mini sharpening stone of 1mm width. The one I used was 300grit. You can use it to roughen up a small area to produce gray tone. You could possibly do the same with a very careful application of sandpaper or wire brush. But it is so useful to have this tool, particularly for very small areas, such as the bird's iris on this print.

Another brilliant invention by Matthieu Coulanges. This is one of my favourite of his tools. Like with the micro etching tool, the handle for this is designed to be used with interchangeable tips. The tool comes with several different tips included. Like the name suggests, this is a bunch of needles bundled together. They make interesting multiple lines and are also useful for extra quick hatching.

Got this from the DIY section. It's just a regular wire brush. You can use this to roughen up a large area so it prints gray. Tones can be built up by varying pressure and frequency. It is tricky to apply to a specific area though, as the brush is rather large. I got around this by masking the unwanted areas with Frisket film before brushing.

Used for blocking areas when using wire brush (or sandpaper). To use, I apply a small piece of film to the area to be covered, and then use a craft knife to carefully cut the outline and remove the film from the area which I want to apply the brush on. The film is clear, so it is easy to see where to cut, also it does not leave a sticky residue on the plate when removed. A clear tape or masking tape will probably work too, though may leave residue or be difficult to cut to fit.

Pretty much same effect as wire brush. Perhaps a bit more awkward to use as it is without a handle. Can possibly fashion some sort of grip to make it easier to apply. Also there are different grits which could allow more variety to the shades of gray. 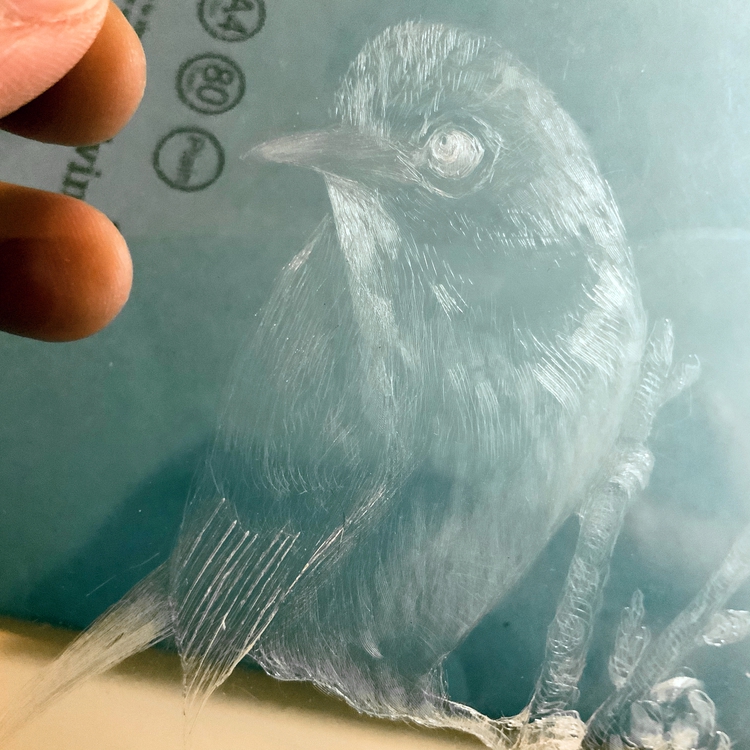 Like with the Tetrapak, if the plastic you use is rather thin, you might want to mount it on another sheet cut to size to make it thicker so it embosses better on the paper when printing.

The plastic surface is much smoother than Tetrapak, I find it easy to over wipe and end up with a print that is too clean. It might be a matter of personal tastes, but I like the whole plate to have some tone, even the areas without lines.

Another advantage over Tetrapak is that the plate seems fairly tough, and can probably withstand a large number of prints. So far I only did 7, but there was no drop in quality at that number. I only stopped as it was getting late (3am again!).

I managed to clean the plate with some Zest-it and might be able to run another batch of prints at a later date. That would not have worked with Tetrapak as the exposed black areas are porous, and will not withstand cleaning. 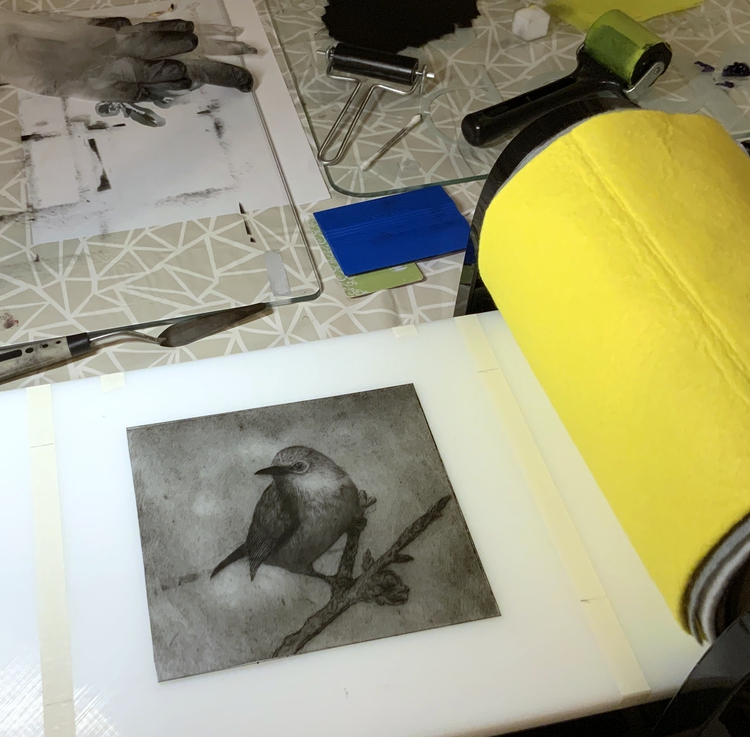 Overall I rather liked etching on plastic. The big advantage is its toughness and the large number of prints I can potentially get from it. But I will continue to use Tetrapak too, as I do love the large darks that is possible with the Tetrapak, and the more variable and organic lines you can get from the softer Tetrapak. Tetrapak is great for drawings with strong lines and large darks. And plastic is great for drawings with gradated gray areas and subtle lines. 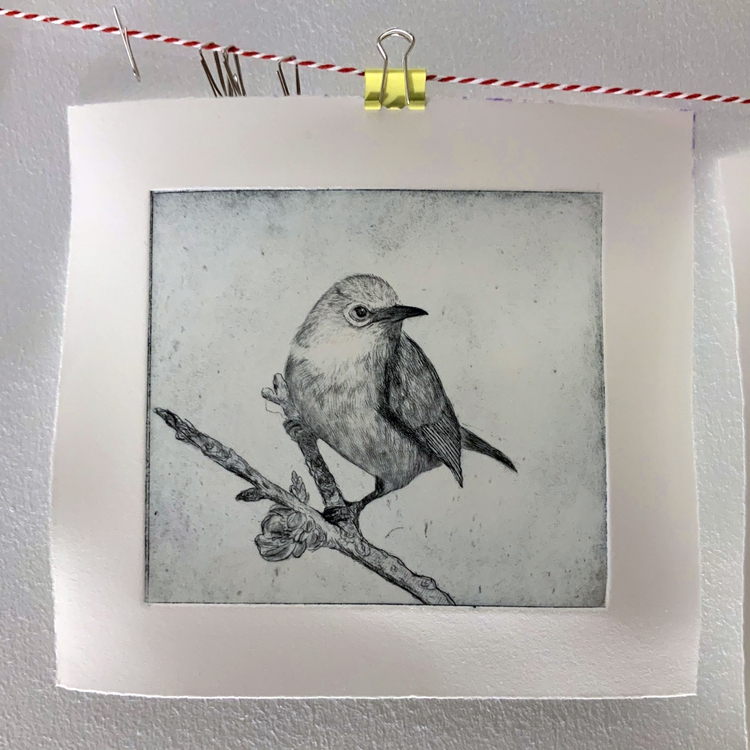 PS: Many thanks to @borisworkshop for his photo of the Mata Puteh on Unsplash.com